100-Second History: The Backstory of our Founders

Three men formed the foundation of our predecessor, American Printing, in 1920 in Temple. Here is a little more about each of them.

In 1908, A.D. Baggett got his first job sweeping floors in a printing shop when he was just 16. He learned the printing business from the ground up, enlisted in the Army during WWI, and eventually went to work for a printer called Hunton & Liles, in Temple, Texas.

When Hunton & Liles left the printing business, he helped found American Printing, and he was the only one of the three founders that stayed with the company until his retirement. He continued to add new products and new lines of business, which helped keep the company relevant. He was nearly 74 years old when he finally retired in 1966 and sold the company to J.W. & Ruth Perry. 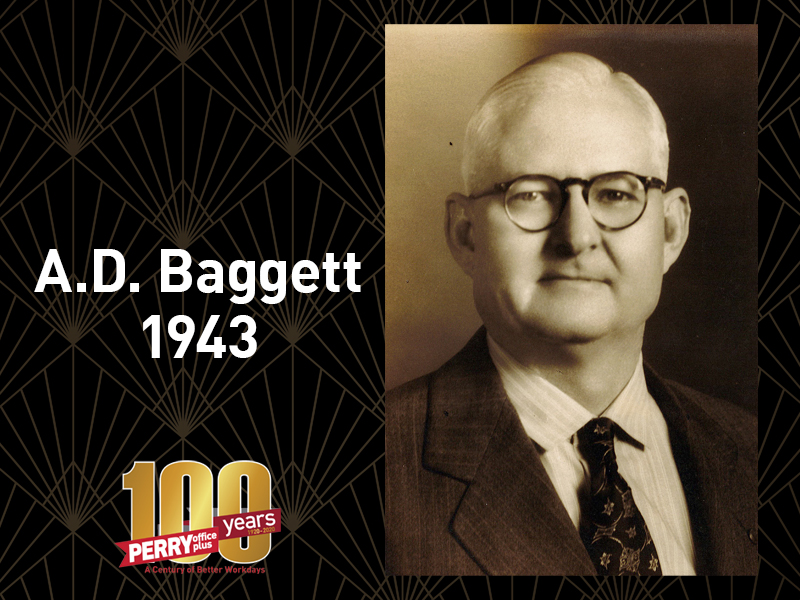 Photo Caption: A.D. Baggett, seen here at age 51, is the only American Printing founder of whom we have any photographs.

The Miller family has deep roots in Bell County and, while R.E. Miller learned the printing trade in Wichita Falls, he worked as a Pressman for The Temple Mirror, and became a manager for The Temple Printing Company in 1919, at age 26. Miller brought his printing skills into the formation of American Printing, which helped make them one of the more popular printers of the day.

By the mid-1930s, the two men had become competitors. Miller formed his own print shop, Miller Printing, a few doors down, which did not fare as well as American Printing, especially after Miller died in 1951 at just 59 years old. It was purchased in 1962 by J.W. & Ruth Perry, who closed its doors when they purchased American Printing a few years later. 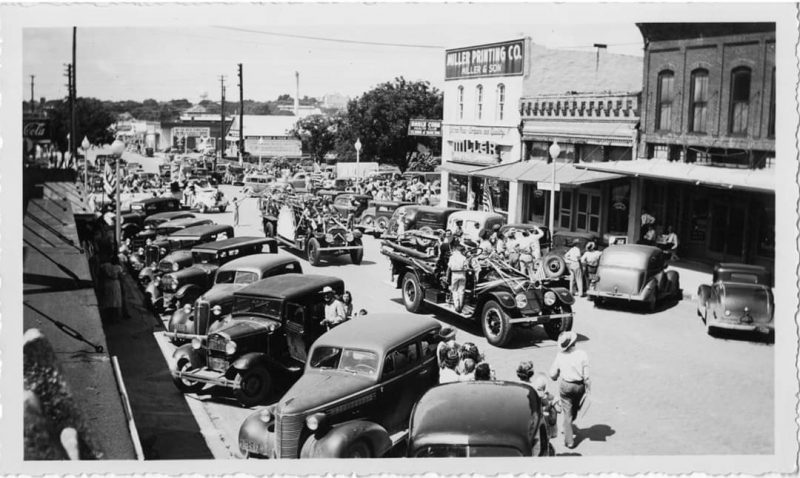 Photo Caption: This photo of a parade on South 1st Street in Temple (circa early 1940s) shows Miller Printing in the center background. This building still stands today, although the sign is long gone. The sign up top says “Miller Printing Co. / Miller & Son”. Raymond, Jr. worked alongside his father in the print shop until he joined the military during WWII and was killed in a training exercise. Temple’s Draughon-Miller Airport bears his name and that of another Temple boy killed during the war. Photo from City of Temple.

In their 1920 printing venture, Baggett and Miller joined forces with W.H. Birdwell, a druggist and oil agent working in Temple. It appears Birdwell was more of an investor, while the other two men were heavily involved in the day-to-day operations. Eventually, by the mid-1920s, Birdwell is no longer mentioned as being part of the company, and records indicate he had moved to Rockdale, although he was working in Temple in 1943, probably at McCloskey Hospital, when he died the age 63. 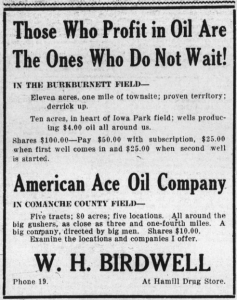 Photo Caption: This is a newspaper advertisement typical of the oil men of the day. This one bears Mr. Birdwell’s name and was found in a Temple Daily Telegram from 1919.