By the mid-1920s, American Printing (the forerunner of Perry Office Plus) was selling plenty of office supplies and even some furniture.

Mr. Baggett and Mr. Miller had also taken on a new staff member, Frank Wright, to be the bookkeeper. He we also clearly involved in some of the day-to-day operations and even has his name on a very interesting patent that was filed in September 1925 and granted in 1926.

Most perpetual calendars of the day simply included a bin for sheets or pads of loose paper, like this one: 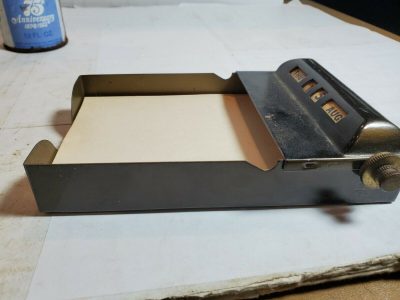 A typical perpetual calendar with a bin for loose note paper. Our founders created a version that incorporated the paper into the design.

It could be argued that American Printing’s “Perpetual Desk Calendar and Memorandum Pad” was indeed a “better mousetrap”: 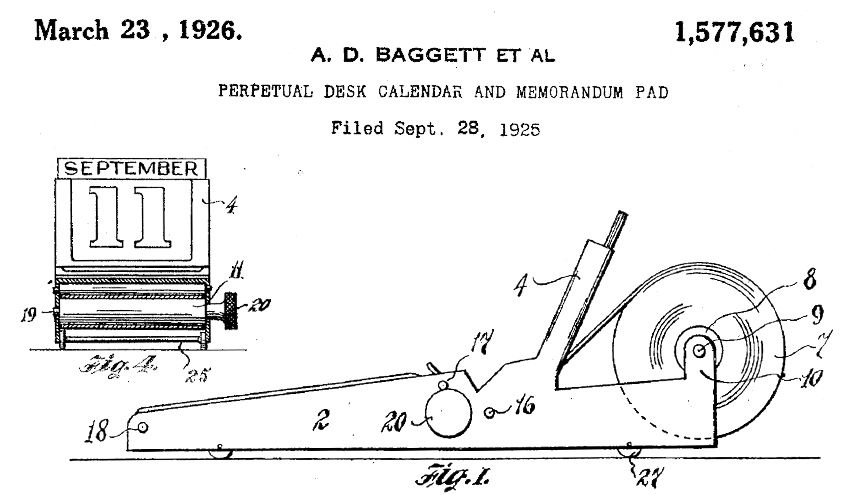 The general idea of this 95-year-old contraption would be that it could be used indefinitely as both a calendar and memo pad.

“The improved desk pad and calendar has a means for holding the calendar slips which may be used from year to year, the pad having a series of rollers, a Supply of paper and a means for feeding the paper through and from the machine.” – From the patent filing

Even thought the mechanics seem elaborate, the filing emphasized that the entire body of the item “is stamped or cut from a single piece of material, thereby making it economical of manufacture,” which certainly would have kept the cost of it low.

The inventors also said the design would keep the paper on track, writing, “The arrangement of the rollers and paper cutter enable the paper to be fed easily and accurately through the machine and the memoranda and notes severed when discarded.”

Subsequent patents from the 1930s and 1940s actually mention this patent as the basis for future improvements. This suggests it was produced fairly widely and would have sold well enough for others to use and think of ways to improve upon it.

Yet another interesting piece of the American Printing and Perry Office Plus legacy!

How useful do you think this item would have been in offices during the 20s and 30s?